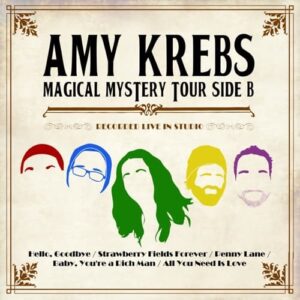 Amy Krebs Performs the Beatles Magical Mystery Tour Side B

In June I hosted a livestreamed concert from my studio featuring Los Angeles singer-songwriter Amy Krebs along with my friends Keith “Stix” Mc Jimson (drums), Leo Budirahardjo (bass), and Jeff Aulich (guitar), and me on keyboards, as part of a series hosted by veteran songwriter Mike Viola, in which each concert in the series re-created one side of a classic Beatles album, chosen at random out of a hat. Our assignment: side B of Magical Mystery Tour. The show took place on June 4 on StageIt.com, and was recorded and is now being released today on iTunes, Amazon, and other fine resellers.

The show was a fun and challenging project to put together. First, I worked on re-arranging the songs to fit Amy’s style. Then, we rehearsed the band in the studio to flesh out the arrangements more and polish the performance. Then, there was the technical feat of mixing live to the internet, while monitoring ourselves in in-ear monitors. The StageIt platform provided a unique venue, as fans were able to buy tickets in advance, tune in at showtime, and converse with us via text chat during the show.

Here’s some audio clips of the five songs from the EP:

I’ve previously worked with Amy on two previous songs (Move On and Story).

The new Magical Mystery Tour EP can be purchased here on this site for $4.95 (by clicking the PayPal button below) or on iTunes or Amazon. Special thanks to Andrew Stanton for the Beatles-esque artwork!