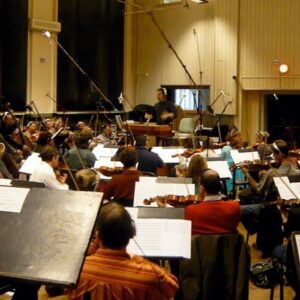 Conducting an orchestral session in Prague 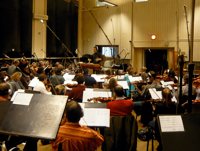 I recently had the opportunity to travel to Prague to work with the City of Prague Philharmonic to record several tracks for the upcoming BarlowGirl Christmas album, entitled Home for Christmas. Produced by veteran producer Otto Price, the album is a beautiful blend of orchestral, pop, and signature BarlowGirl harmonies. Otto and I worked closely to craft the core arrangements for the songs, then I wrote the orchestral arrangements, did some mock-ups with MIDI, then flew to Prague to conduct a 40-piece string section to capture the final textures to be used in the mix. Otto and I specifically reminisced about a beautiful Clare Fischer arrangement from a forgotten album by Paul McCartney (“Distractions” from 1989’s Flowers in the Dirt) and I specifically crafted some of the string parts in that style. Otto is a huge Beatles fan too, so there are a few “Eleanor Rigby” moments thrown in there too.

Here’s a video of one take of Carol of the Bells: