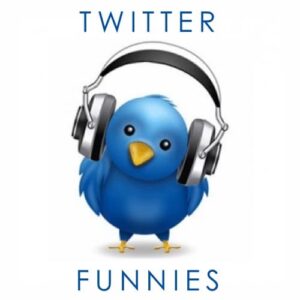 The Funniest Music Tweets Ever

Twitter can be (among other things) a minefield of undiscovered comedy genius. I’m a connoisseur of the fine art of squeezing meaning, entertainment, and unexpected originality into a minuscule 140 characters. Here’s some of the best music-related ones I’ve ever read:

"Mama, you are under oath. Now who did you see that night?"
"Mamakoosaw." (jury gasps)
"Let the record show Mama say Mama saw Mamakoosaw."

The Boxer isn't quite as moving if you picture Simon and Garfunkel shooting geese in between the "Li-la-li's".

On a recent visit to Rome, Prince presented Pope Francis with a joke book. He says only wanted to see him laughing in his papal reign.

If Rick James thinks that liking "incense, wine and candles" is super freaky he needs to get out more.

"Enya" is a whole album about a singer communicating with whales.

I think Aaron Neville has an Auto-Tune stuck in his throat.

Could a murderer do THIS?
*lawyer points to defendant doing cool tap dance*
I remind the jury that only guilty feet have got no rhythm.

Hipster: "Ugh. They were SO much better in 2nd grade."

Everyone knows it's "Private eyes", single clap, "They're watching you", double clap. Now, for the love of God, get your shit together.

My favorite way to punish the kids is by dropping them off at school, windows open, blasting Katy Perry, and singing at the top of my lungs.

*ends every handshake with the lift from Dirty Dancing*

How many Gb is Trent Reznor's "Rachet Sounds" folder, do you think?

The Tide is high, but she's holding on. pic.twitter.com/6NJC0Ah6ZT

Sometimes the hope that somewhere in this crazy world there's someone with a cat named "Cat Benatar" is all that keeps me going.

My girlfriend told me that my Tom Petty obsession is getting out of hand, but I won't back down on this one.
No I won't

— the artist formerly known as the Iron Sherk (@TheIronSherk) September 4, 2014

If you sing 'Eye of the Tiger' as you fall down the stairs, people will think you're a champion and it's not as embarrassing.

Did Hey Jude end yet?

[New puzzle]
Pat Sajak: Jesus, take the wheel.
*Jesus spins*
Jesus: Pat, I'd like to solve the puzzle.
Other contestants: OH, COME ON!

Thanks to the humidity, right now my hair could best be described as "Garfunkel-esque."

You guys are lucky. Blackberry gave everyone a free Celine Dion album.

Adam it's Marvin.
Your cousin, Marvin Levine!
You know that new sound you been lookin for? Well listen to this!

Didn't we just hear this song?

– me listening to country music.

"Killing Me Softly" is actually a song about my family reunion.

"Hello, 911? They're playing Pearl Jam on an oldies station."

Gloria: I want to Instagram my salad.
– But?
Gloria: The pic's not right.
– Maybe…
Gloria: Don't say it.
– Turn the beet around?