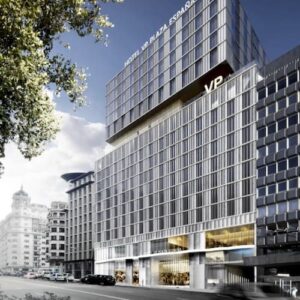 On this Hotel VP Plaza España project, I worked with an audio visual studio which produces architectural concept videos. They came to me with a storyboard and screenplay and a sonic idea of what the video required, and after some conversations and some sonic brainstorming, we ended up with this beautiful video that showcases the architecture of a hotel to be built in Spain.

The music is styled very minimally. I had just acquired a new inexpensive acoustic guitar ($20) and was eager to try out its colors to see what kinds of tones I could get out of it. With some light percussion and piano and an idea of a sonic theme, this piece was born.

The track used in this project became Corianda, which is available in the on this site.