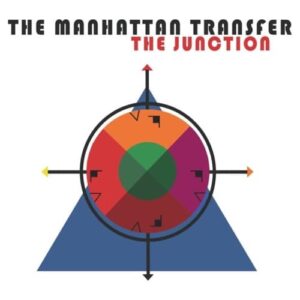 Ten-time Grammy award-winning vocal jazz group Manhattan Transfer just released their new album, The Junction. The group has been making music for forty-five years and has numerous accolades over its long and distinguished career. At the helm of this new project is five-time Grammy Award winner producer and arranger Mervyn Warren, and I was privileged to sit by his side engineering most of the vocals as well as some of the overdubs on the album.

The album features “a new level of vocalese” as member Cheryl Bentyne puts it. It includes harmonizations and re-arrangements of a number of classic tunes, including US3’s Cantaloop/Flip Fantasia, Swing Balboa (Down on Riverside), Tequila, and new originals like the Trist Curless-penned The Junction title track.

“The concept behind THE JUNCTION is this special meeting place – a junction merging our four and a half decade musical legacy with something new,” says Alan Paul.  “It wasn’t exactly a seamless transition because Tim [Hauser] is irreplaceable, he and Trist are very different singers. We weren’t looking to replace Tim’s unique personality, but found in Trist someone who could add a new element to the group, and take care of the bottom of the quartet with his true bass.”

“It’s a whole different ball game, but one we feel is still musically very viable and exciting,” Janis Siegel adds.

Curless reflects, “My personal desire was that the album would sound like The Manhattan Transfer, keeping with what they’ve done, but bringing a new energy that would come naturally with my strengths as an artist, becoming a part of theirs.” 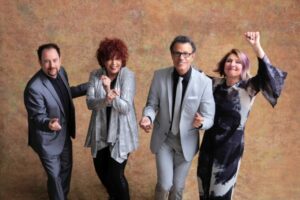 TMT finds new joy in harmonizing the classic rap of Us3’s early 90’s hip-hop/jazz hit “Cantaloop (Flip Fantasia)” – based on Herbie Hancock’s soul-jazz treasure “Cantaloop Island” – which the quartet fashions into Cantaloop (Flip Out!). They also bring newfound pleasures and a party energy to the crowd pleaser, Tequila: The Way of the Booze, with lyrics by Paul. Balancing these optimistic bursts are more pointed social commentaries – XTC’s The Man Who Sailed Around His Soul and Rickie Lee Jones’ harmonically dissonant Ugly Man.

“As the work on this album reflects — democracy is the fabric of the group. It has been from the beginning,” says Bentyne. “We all have a different take on music and appreciate different styles, so each member brings something to the table that is unique. We have tremendous faith in that process. This album is completely us, a true snapshot of who we are right now, having survived so many hardships, but looking forward to exciting new chapters in the band’s story. We give great credit to Mervyn Warren, without whom this project would not have come together as beautifully as it did. His participation, oversight, brilliant arrangements and production helped us make one of our strongest musical statements ever.”

The new album can be found on Apple Music, Spotify, and everywhere else fine music is sold.

David Das @daviddas
19 hours ago
...and now sparklingthreads is planting earworms in my head... https://t.co/xcdFfRHPwy
View on Twitter
0
0

David Das @daviddas
19 hours ago
It's like sparklingthreads is living inside my head. https://t.co/rWk2C2Os7w
View on Twitter
0
0