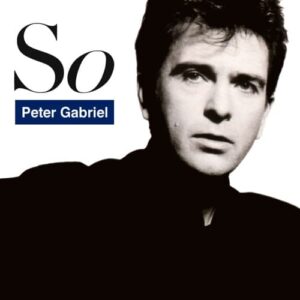 Songblog: Peter Gabriel / In Your Eyes

“If the cadence may be regarded as the cradle of tonality, the ostinato patterns can be considered the playground in which it grew strong and self-confident.” —Edward E. Lewinsky 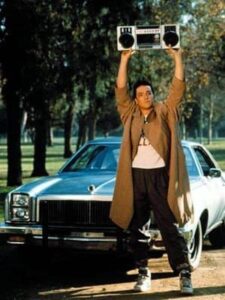 Today we’ll take a look at one of Peter Gabriel‘s most famous songs, “In Your Eyes,” which appeared on his 1986 album So, and infamously in Cameron Crowe’s 1989 film Say Anything (the boombox scene). As an ex-member of the British band Genesis from its progressive rock era of the early 1970’s, Gabriel had developed an eclectic background that included the adventurous writing of prog-rock with a longstanding interest in world music, fused with a now mature pop sensibility that, by the mid-80’s, had evolved to the point that Gabriel could assimilate all these diverse elements yet fuse them into an accessible and enjoyable pop song.

One thing I’ve always enjoyed about Peter Gabriel’s music is his ability to emotionally connect through each element in the song and in the production. It’s evident even in the introduction to the song, a haunting vi-I-IV progression with an inverted I chord and occasional delayed syncopation thrown in there. Even if you’re not into music theory, listen to that intro and notice its unique emotional impact in the hypnotic groove that it sets up, ready for the vocal to begin. It’s restrained, and compelling.

Is this song in major or minor? It’s ambiguous; it’s either in D flat major even though D flat doesn’t appear, or it’s in B flat minor. This is part of its charm, that we don’t know with full certainty where the home key is.

Gabriel is a master of ostinato — of setting up repeating patterns that get layered with other elements to provide groove continuity, There are several key ostinatos in the song that get used multiple times, sometimes in modified ways. The piano part in the intro isn’t ornate; it’s understated, patiently biding its time until the song can organically grow later. Gabriel’s use of multiple and layered ostinatos is one of the secrets of why he builds such hypnotic and memorably catchy songs.

There are a number of additional ostinato elements that I notice in the intro. The 4-on-the-floor kick drum (played by one of my favorite creative drummers, Manu Katche) pattern is reminiscent of dance music, even though there’s nothing electronic about it. Finally, there’s a bed of ethnic percussion. 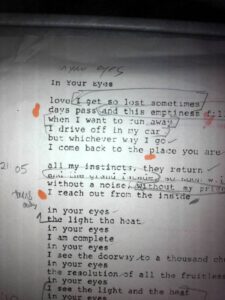 Once the lead vocal appears to kick off verse 1 (0:22 in the YouTube clip), the band is still patiently looping the same two-measure pattern, which creates a subconscious tension as our ears gets comfortable with the groove but also wonders when it’s going to change up. Because the background is so repetitive, it gives the foreground (the lead vocal) the freedom to do anything it wants, and indeed, it’s a very interesting verse melody with a nonstandard structure, and he mixes that husky, evocative voice with a surprise moment of falsetto that reminds me he’s taking us places.

That’s followed by the prechorus (“all my instincts…” at 1:05) which is a new harmonic progression, yet it’s built very similarly to the intro/verse; now it’s V-vi-IV and definitely feels centered on the V chord. This is another subconscious way of continuing the tension of the song; our ears haven’t yet heard the I (root) chord even though it’s implied many times.

There’s two more interesting things about the prechorus. One, the high synth line that adds a new signature sound (another ostinato pattern) to the song. Two, the vocal line, which rests on the downbeat and then sings a phrase following, almost like a question-answer or call-response, but minus the question/call. Interestingly, the high synth line and the vocal line complement each other like two parts of a fugue, giving our ear a lot of interesting things to process in this connecting tissue that is the prechorus. Because there is no point of rest, the prechorus is acting as a very effective connection between the verse and the chorus.

The chorus finally arrives at 1:35. (Side note: it’s unusual to wait a minute and a half before hearing the chorus for the first time; with normal songs we would expect to reach the hook sooner, but this is an exceptionally crafted song that has carefully held us back from the full satisfaction of an arrival point for 1 minute and 35 seconds.) There’s a surprise modulation on the first downbeat of the chorus as the song unexpectedly lands in E flat (technically, the II chord if you buy my assumption that this song is in D flat or Bb minor). As is typical with Gabriel, his ostinatos continue, but they morph. That high synth line from the prechorus continues in the chorus, but it’s transposed and modified. Vocally, the call-answer concept of the prechorus continues, except now the “call” is colored in with the main hook of the song.

The chorus is the glorious pinnacle of the song, and a complex tapestry of several layers of ostinatos now locking together in harmony. There is the harmonic motion established in the intro, the quasi-tribal percussion, the high synth part established in the prechorus, the background vocals with the hook, the call-response between the background vocals and the lead vocal.

The remainder of the song is relatively simple: a repeat of the verse, prechorus, and chorus, leading to a jam with lots of ad libs and colorful elements. It’s a joy to hear live musicians jamming with these infectious grooves through the outtro and playing off each other.

One of the many geniuses of this song, perhaps, is that it’s built from several simple core motifs, often no longer than two measures long, which come in and out of the song in various forms, and there’s great beauty and complexity in how they interact with each other, and it gives the lead vocal great freedom to express its message and melody.

Peter Gabriel has revealed some of his early demos for In Your Eyes and posted them for listening, here:

One of the best performances I’ve ever seen of this is available on the epic Secret World Live concert from 1993 (available on DVD or CD).