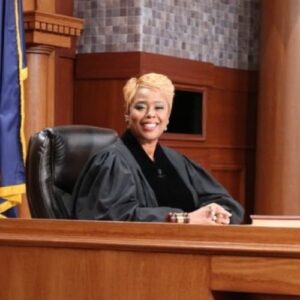 I’m thrilled to announce that I’ve written the theme music and underscores for a brand new show, Supreme Justice with Judge Karen. Judge Karen Mills-Francis is a court-show veteran, having hosted two previous programs, the first produced by Sony Pictures Television and the second produced by Litton Entertainment. Prior to becoming a TV judge, Mills-Francis was a county court judge in Florida and a criminal defense attorney in Miami. She’s especially focused on advocating for the rights of families and children.

Writing this theme required some “exercising”: I actually wrote four different potential themes for this show, experimenting with different flavors and approaches, before settling on this one that has a slight urban flavor to it. Once this track was confirmed, I created numerous variations on it: drums only, no drums, extended underscores, stingers, and bumpers, all so that this theme can be rearranged in any way the show may eventually need it.

This is the latest TV show I’ve scored in the past few years; previous shows include Parental Discretion with Stefanie Wilder-Taylor and The Young Icons.

One episode of the show is available to watch on YouTube here.