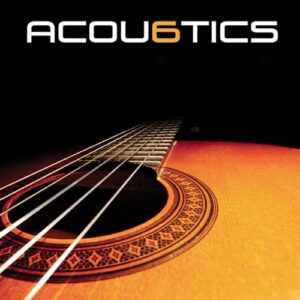 As a voracious user of virtual instruments in my daily composing work, it’s also tremendously rewarding to be a small part of creating them. During my time on staff with Big Fish Audio and Vir2 Instruments, I worked on Acou6tics, a next-generation virtual acoustic guitar library which builds on the technology earlier developed for Electri6ity, a virtual electric guitar library.

Acou6tics has six meticulously recorded acoustic instruments: a steel-string guitar, twelve-string, nylon string, ukulele, mandolin, and guitalele, and presents them in astonishing detail. It features both plectrum and finger picking, and Blumlein stereo recordings alongside the piezo pickup perspective. Thousands of samples across more than a dozen articulations were recorded for each instrument, including sustains, mutes, releases, legatos, hammer-ons and pull-offs, slides, harmonics, and effects. Acou6tics also features virtual room control with adjustable mic distance and sympathetic resonance. It is powered by the Kontakt Player engine.

The capabilities of Acou6tics are quite impressive; here is a track created using only Acou6tics (and yes, the tape hiss is added for authenticity; it’s not in the raw samples):

Here’s a video of me and two other composers, Steven Bolar and Julian Cisneros, playing Acou6tics:

David Das @daviddas
8 hours ago
Ever wanted to hear Aaron Copland in rehearsal? It's a peek into history: https://t.co/dGNzPsIfpH
View on Twitter
0
0

David Das @daviddas
1 week ago
New on the YouTubes: I pour my years of working with choirs and a cappella groups into a new one: Choral Writing for Orchestral Composers: https://t.co/FiAjKViCHL
View on Twitter
0
1